I'm Getting Ready for Halloween

This is my most favorite time of year, even better than Christmas as far as cross stitch goes. This you will see in this post.  I have only worked on one of my older wips since my last post and it is "Needlework School" from Little House Needleworks. 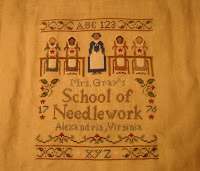 As you recall I made a few small changes, it's my needlework school and it's not in Philadelphia, PA. I like to say it's a complimentary piece to the Embroidery Guild, which was a finish earlier this year.

I also had another finish, it's from a booklet called "Shortnin' Bread" by Alma Lynne. I started a SAL in a stitching group on Facebook and "Susie" as she is called was my choice to stitch. Because of the SAL I was able to stitch her start to finish in 12 days. 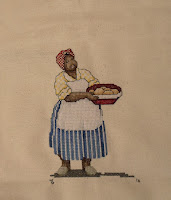 As the title says I've been getting ready for Halloween, first with two, that's right, two FFOs.

This one is "Wicked Witch" from LA-D-DA and just love it. It is the words from a song in the Wizard of Oz but it says witch so to me it qualifies as Halloween decor. I especially love the hat, shoes and broom at the bottom. My second FFO is called :The Skeleton Key" by Lee Fisher of Stitchy Fish Design from the 2016 Halloween Just Cross Stitch magazine. 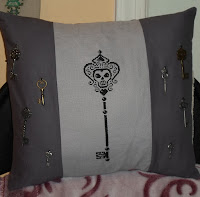 My pillow is slightly different from the magazine model but I love it. 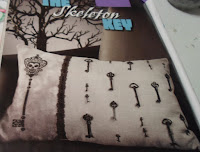 This one I just call Happy Halloween Bookmark, it is originally called Accessorize by Frony Ritter of Frony Ritter Designs also from the 2016 Halloween JCS magazine. I started it to be a new name tag for the upcoming retreat in Harrisburg, PA but it was too big for my ID holder.

These next two don't have anything to do with Halloween but they called to me to be stitched. 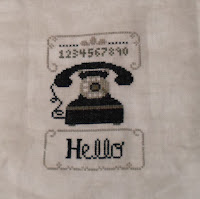 HELLO is designed by Diane Williams at LHN as a cover for a smart phone.

Finally, last but not least is my Smiling Pile of Poo. 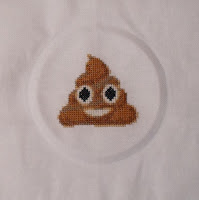 This one made me laugh the whole time I stitched it. It is a freebie from Plutonium Muffins. And on that note I say thank you for visiting and I need to go back to making some wonderful little xxs.
Posted by Minnie at 2:32 PM

You are keeping busy. Love all the projects...Love, love Shortnin Bread.

Lovely projects,especially the skeleton key.Your smiling pile of poo makes me smile too:)

Such a variety of lovely things you've been working on, the Shortnin Bread is beautiful.

Gorgeous stitching and finishing- I love the La Di Da bell pull and Shortnin' Bread is really pretty too.

You had a great month. I finished Hello earlier this year. It was the perfect stitch for me - I miss my rotary phone! Your pillow is great the fabric you used is perfect. I ordered Shorten Bread used on Amazon and it arrived this week. Your finish is wonderful. This chart reminds me of my late mother-in-law who was so special.

Pull the other thread said...

Such fantastic finishes. You have been very productive and getting in lots of stitching. All your finishes look wonderful

You have been very productive.
Great stitching and finishing!

Congratulations on your finish of "The Skeleton Key", it looks great! So glad you enjoyed the design! I have a nice companion piece to that one available here ---> http://stitchyfishdesigns.blogspot.com/2016/09/you-hold-skeleton-key-to-my-heart.html

Jo who can't think of a clever nickname said...

Great work this month, I also love Hallowe'en and have been sorting out my spooky stitching!
I love the way you've finished the Skeleton Key cushion.

Lots of great stitches but I LOVE the key pillow!

Minnie
I am a retired government worker, the mother of two grown children, wife to the love of my life for almost 40 yrs, pet-parent to a very nervous Rat Terrier.